The third in a short series of articles on crafting effective, well-formed objectives as part of the SAFe® Program Increment (PI) / Big Room Planning activity.

As we saw in the previous articles in this series, objectives are not just a repetition of the features that the team is doing; there’s far more to them than that. In this article we look at how PI Objectives are a key part of the PI Planning Process.

Objectives are not an input to the PI Planning process they’re the output; they are created to describe where the team’s time and effort will be spent in the upcoming PI. Teams should try to avoid waterfalling the writing of Objectives; don’t leave it until the very end! Write objectives up as you plot work into sprints and/or as work is negotiated with other teams.

Teams should be applying the Lean and Agile principles to the act of planning itself. Teams should be taking one feature at a time from the backlog and adding it to their plan; but at the same time the teams should be deferring elaboration of the detail until later. In practice this means breadth not depth. Teams should put a rough plan together early in the planning process and have a full set of candidate objectives ready by the end of the first break-out even if they haven’t finished planning all of them. This is so that the Business Owners can do a proper job of scoring the objectives during the second break-out on Day 2. The act of scoring the objectives will inevitably result in negotiations that will change the details so better to defer elaboration of those details as late as sensibly possible in the process to avoid effort being wasted on detail that subsequently gets negotiated away.

With a rough plan assembled and candidate objectives laid out the team can continue to add more detail; particularly foucs on the early iterations as the detail required for execution will be needed sooner than the later iterations.

3.3 Getting to good objectives

Crafting the words for a good objective is itself an iterative process. In this example we’ll look at the steps that a team have gone through to get to a good objective and examine some of the thought processes that drove development of the objective. 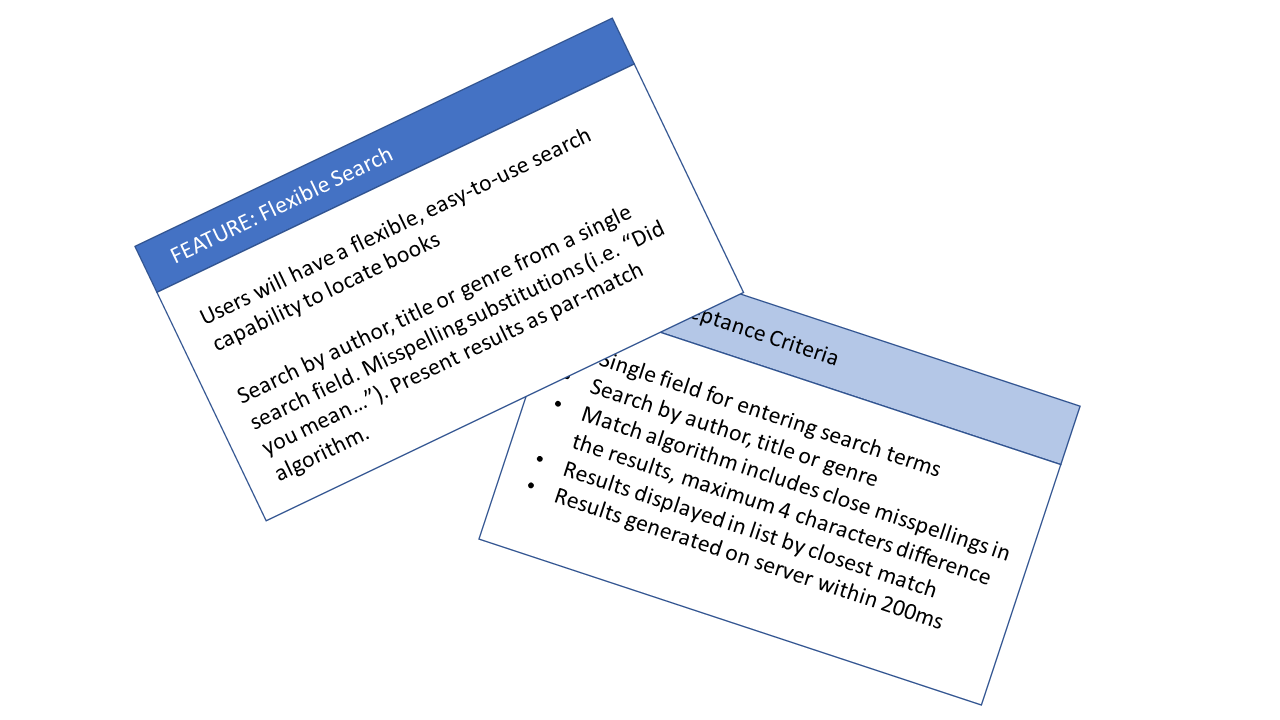 The team have grabbed a feature called “Flexible Search” and have been negotiating and planning it during a PI Planning event.

Their first attempt at an objective is:

Essentially just a restating of the feature name; this is likely not specific enough to capture any negotiations that have occurred during the planning event itself. As a coach my questioning to the team will often start with “Are you planning to do all of it?” Upon questioning the team reveal that scope negotiation has occurred so the results of that negotiation get written into the objective.

“Basic” is one of our trigger words; it’s not specific. The team need to rephrase that to explain what their idea of “Basic” is.

“Levenshtein Distance Algorithm” is too specific; it locks the team into a specific technical implementation. Whilst we want to be specific (from the SMART acronym)about the business outcomes desired It would be preferable to preserve the design options available to the during execution, following SAFe® principle #3. Flexibility in this dimension allows the team to explore other algorithms with the aim of achieving a better business outcome. The specific technical phrasing is also something that the stakeholders might struggle to understand. The team are steered towards rephrasing this in terms of the outcome expected and using language the stakeholders will understand.

Do we need to clarify any other assumptions that people might have? In this instance is this just the back-end processing of the search or are the stakeholders expecting to see the results listed?

“Simple” is another trigger word; it’s not specific.

By referring to the Feature Card they find that the level of fuzzy matching desired has already been defined, and that there are already some negotiable acceptance criteria that hint at the expected results. Using this information they add more notes to the Feature Card and prepare their final revision of the objective.

The journey to a good objective has captured the negotiations of planning, ensured specificity whilst preserving flexibility and clarified any assumptions.

Some of the criteria for Uncommitted Objectives are:

Can the highest priority Feature from the backlog be an uncommitted objective? Yes. Use of uncommitted objectives is to indicate risk and if there is significant delivery risk then it should be a stretch objective. If the stakeholders requesting and prioritising the features don’t like that then encourage them to work with the team to de-risk the delivery; the stakeholders may have more authority over any external factors and can help the team.

Teams and stakeholders must learn to strike a balance and embrace some degree of risk; only significant risks involved in delivery should be criteria for classification as an Uncommitted Objective.

As part of the activities occuring during the Team Breakout Session on Day 2 the Business Owners are asked to score the objectives. SAFe® uses the phrase Business Value; but our preference is to use talk about importance to the business rather than value.

There are three reasons for scoring the objectives:

Closing The Loop: The score will be used to close the loop on predictability of the team’s delivery of the plan. Closing the loop will be covered in part 4 of this blog series.


The score is range between 1 and 10 and providing a range is important; if everything is given the same score them it provides no useful information everything is equally important or unimportant. We have seen organisations which have enforced a ruling where “there must be a 1 and there must be a 10 in the scorings” in order to force the Business Owners to think about providing range. Scores are not intended to be comparable across teams and the sum of the scores is also irrelevant; when we close the loop it will using percentages of the total score not the absolute total score.

SAFe® refers to the group scoring the objectives as the Business Owners; this group isn’t every little stakeholder of the release train but those few stakeholders that typically have true accountability (typcially financial) for the success of the work being undertaken. Typically this is no more than 2 or 3 people. We would also recommend that the most senior technical figure in the room be part of the Business Owner group as well; their role being to explain the technical aspects of the plan (like architectural enablers) to the non-technical people in words and language that allows the non-technical people to understand the benefits.

During the PI Planning event team’s need to communicate their plan to the rest of the release train on two separate occasions, Draft Plan Review at the end of day 1 and Final Plan Review in the middle of day 2. These plans need to be communicated quickly but accurately without digressing into team level technical detail. The assembled audience wants to know what the outwards value deliveries are from the team and the collaborations needed to help with value delivery. Just reading the team’s objectives should provide this focus; if a team has to extemporize when reading their objectives then it’s a sign that the objectives aren’t clearly describing the team’s intent.

3.7 Beyond PI Planning: Reaffirming your commitments

In the fourth part of this series we’ll look at how the objectives created during PI Planning are used during execution of the PI.

#1 Prior to SAFe 5.0 Uncommitted Objectives were known as Stretch Objectives. The renaming occured because people were misunderstanding the intent of Stretch thinking they were “nice to haves if time allows” rather than their true intent of expressing risk.