Why do we need PI Objectives when we have Features?

We have seen a lot of confusion surrounding the use of PI objectives; confusion that often results in:

The first step to creating well-formed, useful objectives is for everyone to understand why they are so important.

1.2 Why are PI Objectives so important?

The purpose of PI planning is to generate alignment and allow teams to innovate, estimate and plan their own work.

“The mission is a general statement of how you will achieve your vision. Strategies are a series of ways of using the mission to achieve the vision. Goals are statements of what needs to be accomplished to implement the strategy. Objectives are specific actions and timelines for achieving the goal. We enter PI planning with a loosely defined set of goals that align to the previously considered business strategy (we shouldn’t have a room with 50 – 150 people ready to plan if we don’t have a strategy that their existence supports), and a prioritized set of Features that support, but do not guarantee, the achievement of the goals.”

The overall goals of the PI and the list of Features are presented to the team by the Business Owners and it is the job of the teams to come up with the objectives that embody the specific actions and timelines for the achievement of the goals.

1.3 Why do we need PI Objectives when we have Features?

Now many people think that the role of the teams on a SAFe® Agile Release Train (ART) is to act as a software factory; mindlessly churning out the Features that have been selected by the Product Manager. This mindset is akin to the traditional waterfall mindset where the decisions about how to perform the mission and achieve the goals have already been determined by the great and the good.

For an Agile Release Train (ART) to be a high performing team of teams, the teams need to look beyond the Features and take ownership of the achievement of the goals themselves. This involves doing many things not found in, or even directly related to, the Feature list. If we want to have truly empowered agile teams then they need to be able to come up with their own objectives and not just select things from a pre-defined list.

Figure 1 illustrates the kind of things that ART’s need to consider, if not actively pursue, every PI. 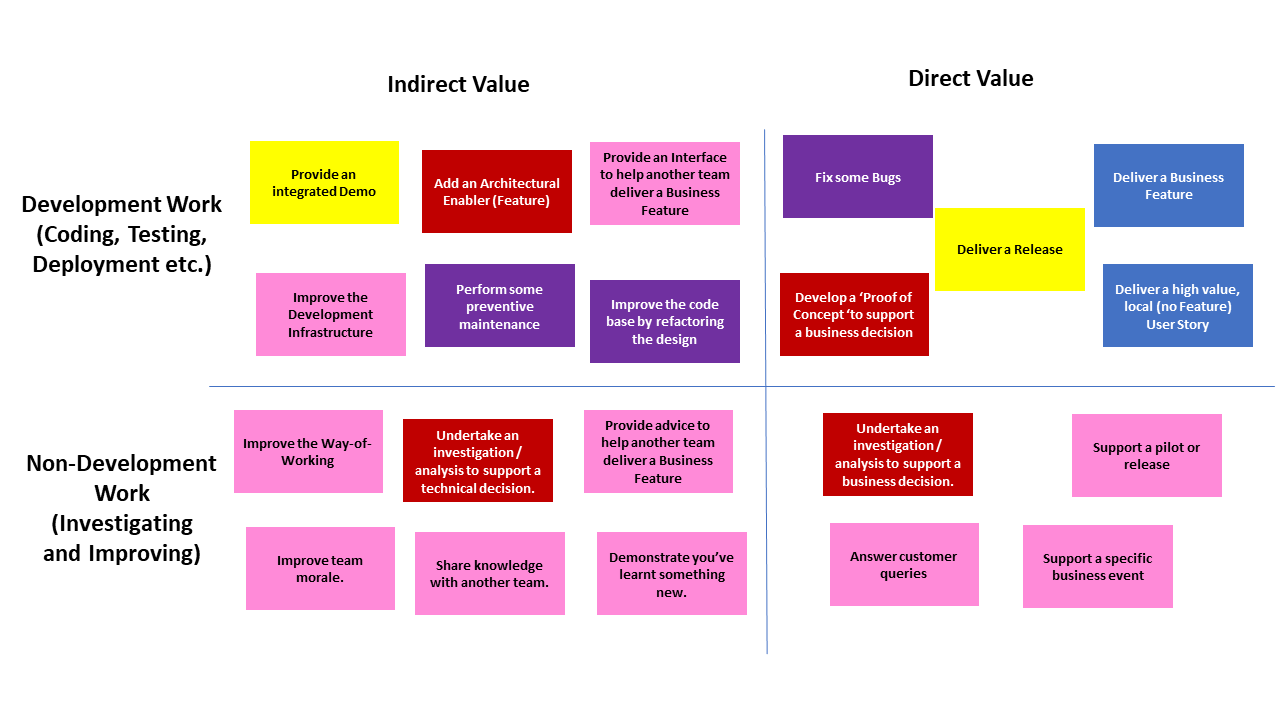 The positioning is illustrative only as the actual amounts of value and development work are context specific. The key points to note here are that:

The goals of a team’s objectives are many including:

They articulate the specific achievements each team is going to contribute to the shared goals of the train.

1.4 The Relationship of PI Objectives to Features: Clarifying the Benefits Hypothesis

There is another important thing to remember when considering the relationship between Features and PI Objectives: Features are assertions and hypotheses not formal requirements. They are asks and not tells – pseudo goals and not agreed objectives.

The true relationship between a Feature and the PI Objective that a team creates when committing to deliver a Feature (or set of Features) is one of qualifying how the team intends to validate / prove / challenge the Feature’s Benefits Hypothesis. They do this by clearly stating the measurable results that their implementation will generate.

The team’s PI Objectives should qualify the benefits hypothesis of the Features they have selected and provide details of the real measures that they will use to do this.

Note: Teams that take on a Feature and quickly disprove the benefits hypothesis deserve full credit for their work and should score highly when the PI Objective is assessed at the end of the PI. We’ll talk more about assigning ‘business value’ to PI Objectives in the third article in this series: “PI Objectives and the PI Planning Process”, and reviewing the completion of objectives in article 4: “PI Objectives Beyond PI Planning: Reaffirming and Monitoring Your Commitments”

Well written objectives describe both the purpose of the actions being taken and the evidence that will be used to assess that the actions have been successful.

One very popular form of writing objectives in this style is the Objective Key Result (OKR) format popularized by Google.

This can be presented informally as a simple statement such as:

Objective: Provide an API to allow items to be added to the shopping cart by the end of Sprint 1 so that team Alpha can allow the results of their searches to be purchased. Key Results: The Shopping cart is successfully integrated with the search and browse functions allowing individual items, or sets of items, to be added.

Regardless of the formality of the presentation it is important that each objective clearly describes its purpose, any applicable anchors or constraints (such as when it is needed and who needs it), and finally the evidence (in the form of actionable, measurable results) that will be used to assess how well the team has done in achieving (or surpassing) it. In the next article in this series we will look in more depth at how to write well-formed PI Objectives before moving on to look at how objectives emerge from the PI Planning process and, finally, how to use the PI Objectives during the PI itself.

In the second part of this series we’ll look at some of the practicalities associated with Writing good PI Objectives and how the writing process itself is iterative.