On The Nature Of Portfolios - Portfolio WSJF - Part 1

For this investigation we will use a set of Epics against different variations of the Weighted Shortest Job First algorithm to see how the scenarios develop. I think I’ve made the Test data as sensible as possible, but only by using the test set against different scenarios will it be possible to understand if it really is a sensible test set. I should also state that I do not know what the right order is to approach these topics and this challenge exists out in the real world as well; it’s hard to validate whether this was the right approach to the work because it is hard to test the alternate scenarios to see if they were better. Organisations do not go back and redo the work again but in a different sequence to see if they get better results; they ignore sunk costs, begrudgingly, and they just have to get on with deciding what to do next. 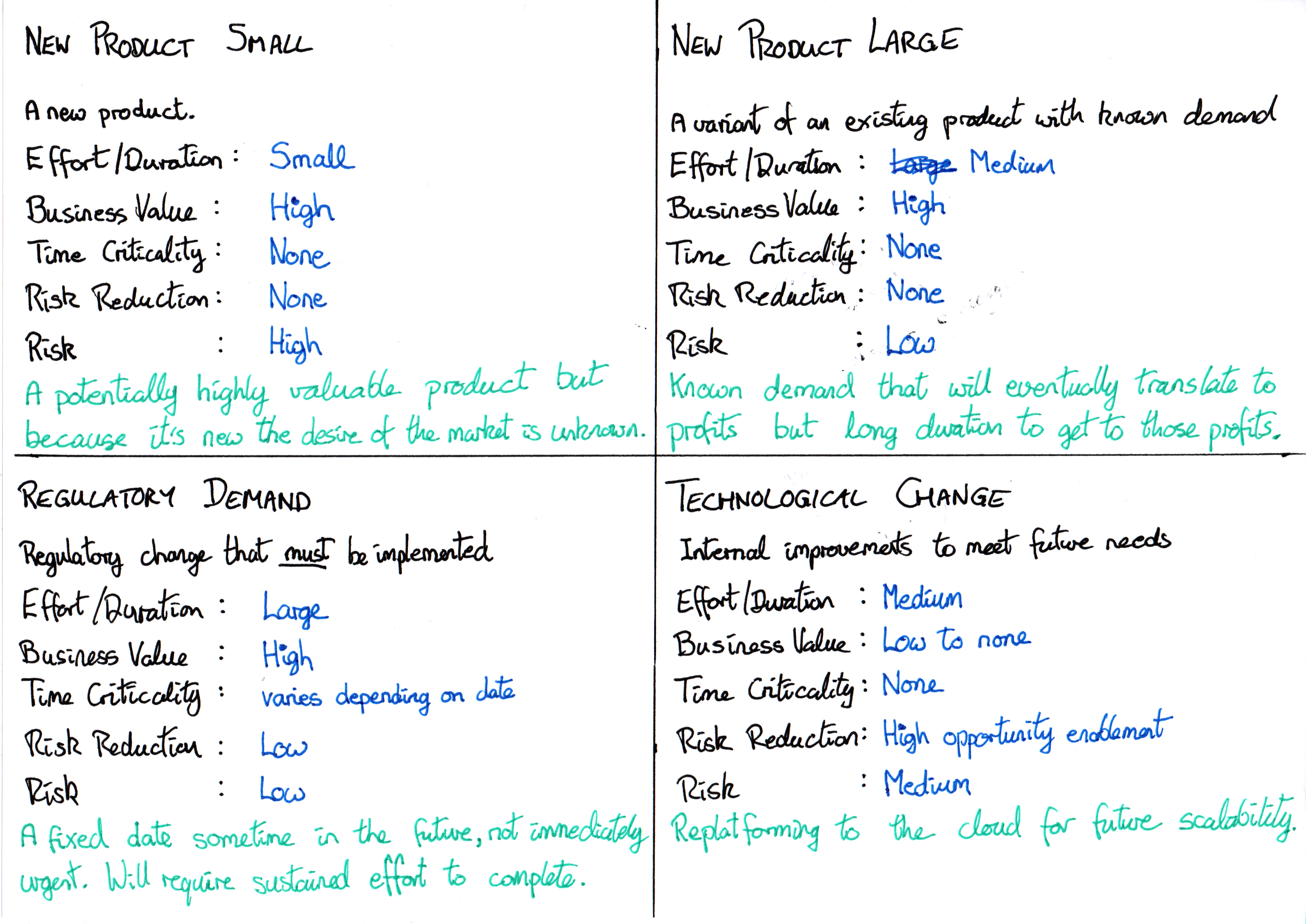 As a first experiment the WSJF calculation will be run using Total Epic Effort for the Effort estimates.

WJSF only considers the potential value in return and assumes that that value will be returned when the work is done. Is this the right? Product S has high potential value so WSJF prioritises it but there is a risk that that promised value might not materialise. Other mechanics such as the Lean Start-up technique need to be used to turn a risky endeavour into a series of Risk Reduction Experiments, in this case experiments to understand whether the public want the output of the Epic could be run before committing expensive engineering effort to the Epic.

In any Agile environment the effort estimates should always be an estimate of the effort required to complete the remaining work. This can lead to some interesting challenges because through doing the work you might realise that more work is involved than you at first thought. Time has passed in our experimental scenario and PI #2 arrives. Product S has had some technical challenges. Its consumed effort in PI #1 and the promised value is still there but the remaining effort, despite work already being done, has increased to 2.

The promise of a high BV or RR|OE in the future can distort the WSJF if the effort estimate is always small.

The implication arising from this is; for every Program Increment there needs to be some form of insight gained in order to influence the Epic assessment processes within the Portfolio.

Another observation is that WSJF never stops anything; it deprioritises things, but it doesn’t stop them. Another mechanic running alongside (or around) WSJF needs to look at the metrics, the Business Outcomes and Leading Indicators, of the Epics and assess whether Epics should be allowed to continue.

Large effort items might not get prioritised until too late without the application of some careful reasoning around the timings.

Equally, large effort does not imply large duration because Value Streams/ARTs could swarm around the Epic and complete it in parallel.

In the example that we’re experimenting with, the Regulatory Demand requires every Train in the Portfolio to contribute to the Epic and ensure that the solutions they own are compliant. Each train can work independently of each other so they can all work in parallel; in a swarming scenario Duration can be significantly shorter than effort.

Work being done in parallel, Bad!
Teams swarming in parallel on work, Good!

In the next post we’ll run an experiment to look at what happens to Weighted Shortest Job First if instead of Total Epic Effort we utilise Predicted Duration which can incorporate team swarming.