On The Nature Of Portfolios - Portfolio WSJF - Part 5

It’s all a bit one dimensional.
It doesn’t really account for the risk that
those profits might not happen!

Why not explore whether some of the techniques from Risk Management might help? After all; Portfolio Management, at a certain level of abstraction, is effectively risk management. Managing the risk that what we’re doing might not get the outcomes we desire. Lean Portfolio Management techniques as promoted by SAFe tend to fare better at this because, when done right, they’re focusing on Outcomes rather than doing the work; thereby mitigating the risk that doing the work won’t achieve the outcomes. 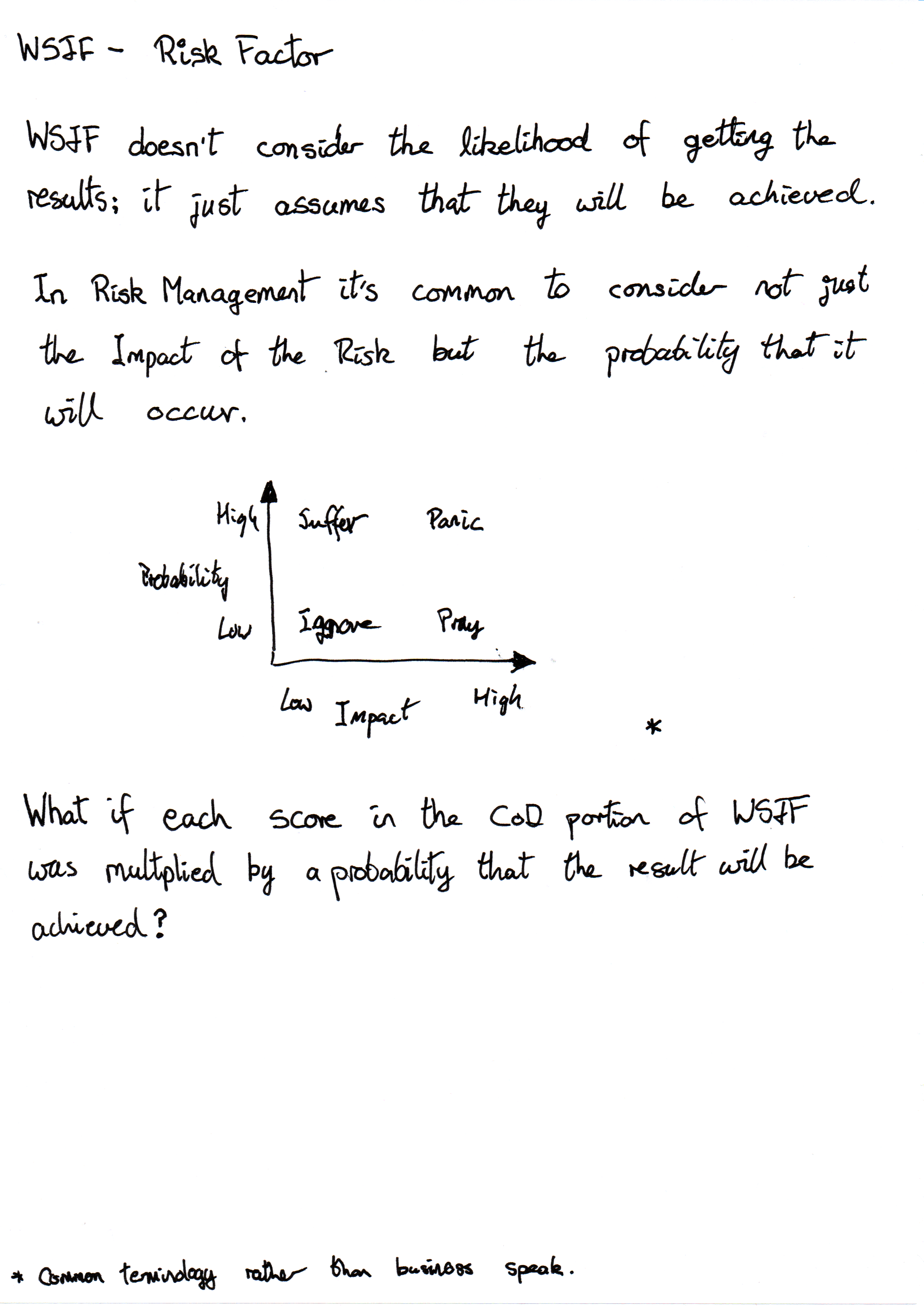 A fourth experiment where the Cost-Of-Delay contributions are adjusted for the Outcome Probabilities and the Total Epic Effort is used as the denominator. The standard table has been supplemented wtih probability columns for each of the contributors to cost-of-delay. The Cost-Of-Delay is now calculated by multiplying the contribution with it’s probability and then summing togther.

Even though Product S is risky which decreases the Business Value contribution. because it’s Effort is small compared to the others it still wins. Which is to be expected; effort is still the dominant factor. The effort of the other items to be reduced to bring them inline with Proudct S’s effort.

This provides a sensible mechanic for thinking about “What experiments need to be run?” The Epic Owner should be looking at experiments that increase the probability of future parts of the Epic; i.e. De-risking the Epic.

Some advice on how to determine the probability scores:

Observation: There must be at least one 1 in each column

Weighted Shortest Job First is deliberately set up to give each column equal weighting and it does this by insisting that each column has at least one 1 in it. Although the Outcome probabilities could be reducing scores still further as long as there is still at least one 1 in the value parts of the BV, TC and RR|OE then they are equally weighted.

A fifth experiment, within this timebox (Program Increment) what experiment or new functionality does this Epic want to run to provide the metrics to justify its continuation with the Cost-Of-Delay contributions adjusted for outcome probabilities.

Compared with the Experiment 3’s Experimental Effort Approach from the earlier blog, the development of “Risky” Product S has been pushed further down the priority stack whilst the experiment to de-risk Product S by running a customer survey is highest priority. The important regulatory work is starting to get prioritised.

In my mind at least it’s starting to feel like there is a better balance between Short term gains and Long Term investment.

All models are wrong, but some are useful

Weighted Shortest Job First can be improved by reframing what is being Prioritised. This reframing into “which feature set or experiment from an Epic?” still falls in line with our Principles and Lean-Startup thinking.

The reframing does need to be treated with care to avoid falling into bad habits. If Work-In-Process limits are not established and honoured, then the process will lapse into every Epic getting a little bit done and everything being done in parallel, so everything is delivered late.

Weighted Shortest Job First just prioritises, other mechanics are explicitly needed to deal with Cancellations and those will need to draw upon other metrics within an Epic to justify the Epics continued existence.

As we’ve seen with the Risk Factors experiment the algorithm could be refined, possibly improved, but adding more and more parameters is just a case of dimishing returns; the effort involved in calculating more parameters will far outweigh the improvement in the results. Perhaps most importantly, WSJF isn’t “The Answer”; it’s a tool for framing conversations; “What should we prioritise?” Those conversations agreeing priorities are more likely to stop an organisation from imposing “It’s all got to be done and it all has to be done now!” mentality which will inevitably result in overloaded teams and eventual failure.

Throughout the last few posts we’ve highlighted that Weighted Shortest Job First is just a prioritisation mechanic and other techniques and activities need to accompany it as part of the set of Portfolio Processes. In the next few posts we’ll look at the feedback cycle of Epics and put the case for and against splitting large Epics.

I revisit the topic of WSJF for a Part 6 to this series.