On The Nature Of Portfolios - Portfolio WSJF - Part 4

The standard advice within SAFe is that when it comes to prioritisation use Weighted Shortest Job First (WSJF). It is a useful simplification to stop Cost-Of-Delay discussions getting unnecessarily complex, but there is more depth to the mechanic than people would assume from reading the SAFe webpage; depth that I’ve previously explored in a blog on The Subtleties of Weighted Shortest Job First.

WSJF, what would Don do?

WSJF as outlined within SAFe is a set of approximations and simplifications to allow the calculations to be done quickly and repeatedly. The results are good enough for prioritising features within a Program Increment but as we have seen in the earlier experiments; they start to suffer at the Portfolio level where there is a need to balance Short Term wins against Long Term investment.

For the Portfolio where the volume of work items flowing through is significantly less than a train backlog we could adopt a more rigorous approach to calculating WSJF. 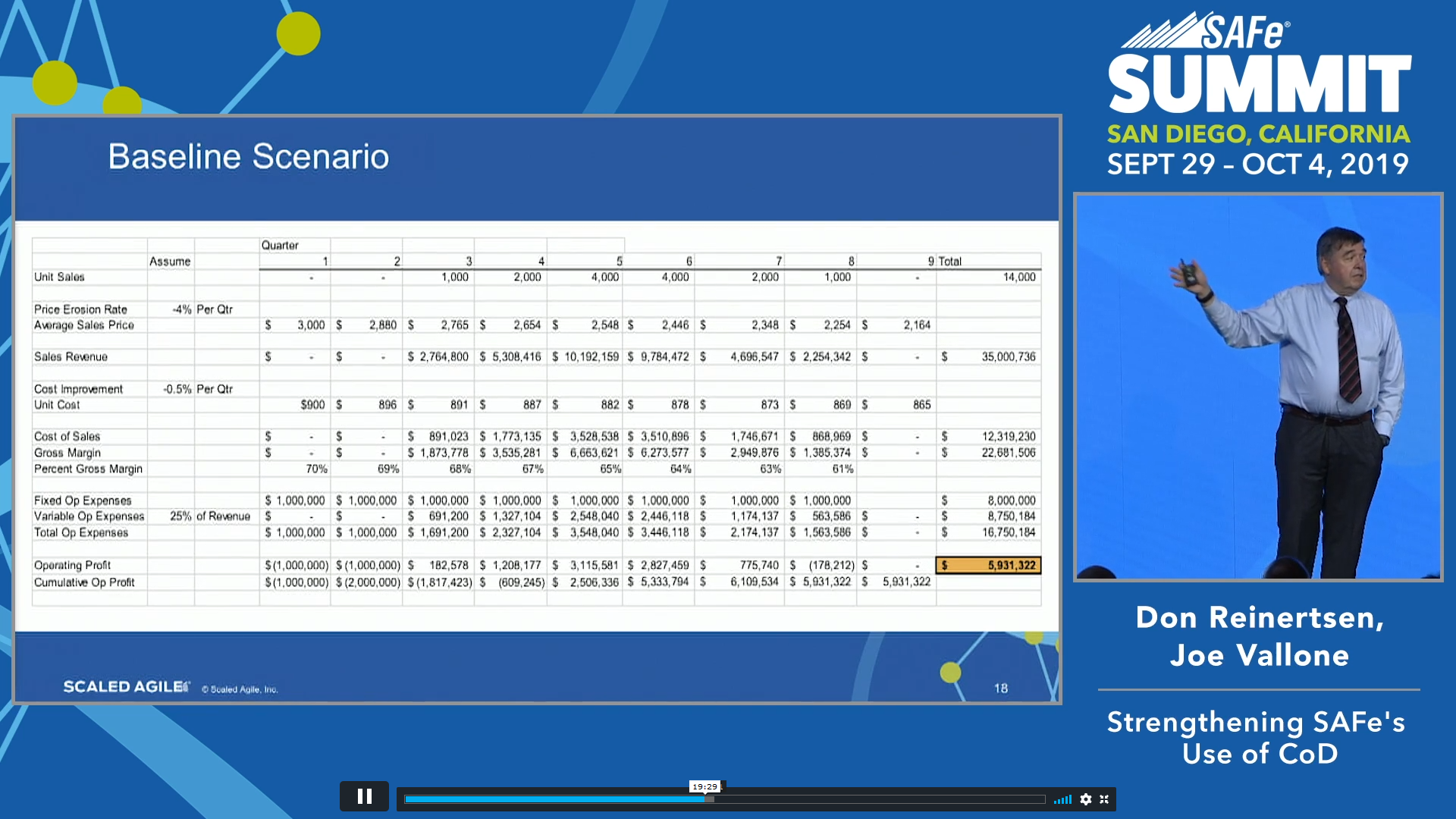 Don Reinertsen and Joe Valone proposed a more accurate version of Cost-Of-Delay for Portfolio use at the 2019 SAFe Summit. Don’s accountancy spreadsheets hide some fairly simple maths which I’ll try to illustrate graphically. 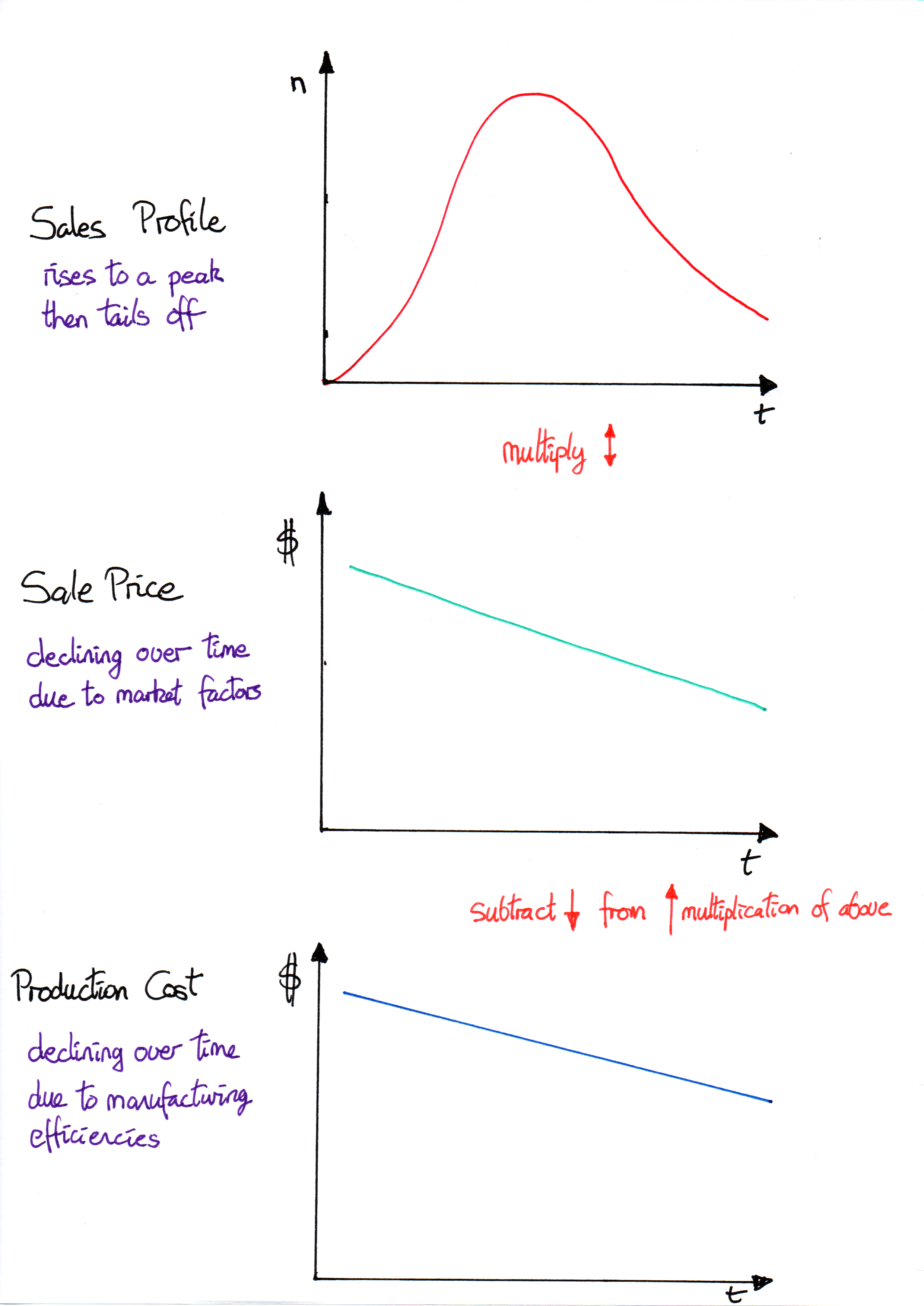 With the scenario set up we can now start investigating what happens when the availability of the product for sale is delayed. If the product is delayed then the Sales Profile will shift to the right, as will the Production Cost but the Sales Price remains where it is; the assumption being that the sales price is decaying from this moment in time, right now. As seen is the “Profit If Product Released Later” graph is the product is delayed then the profits are less because the price at which it can be sold is less because it has been decaying over time. 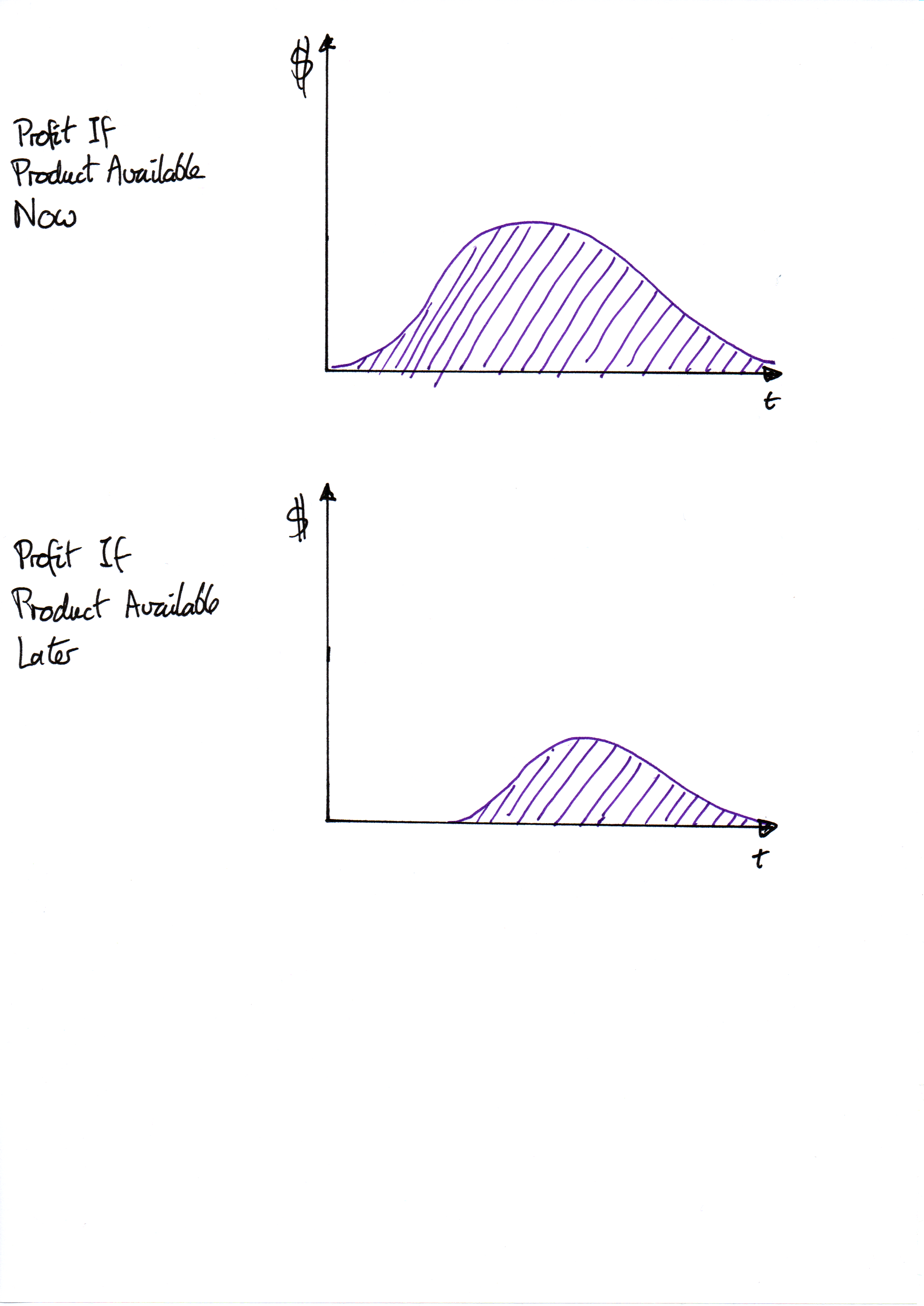 I would expect that the sales and price figures/graphs are influenced by Market Rythmns; Festive Decorations are not worth much once the December Holiday season is over; the Sale Price wouldn’t be lovely straight line but would have a catastrophic decline once the window of opportunity has passed.

The sales and finance departments within an organisation should have historic figures to be able to make sensible predictions about how things might play out and it would be the Epic Owner’s job to develop these scenarios as part of building the Business Case for the Epic.

Don’s presentation shows that we can do better for Cost-Of-Delay, but it still doesn’t solve that fundamental challenge of how to balance Short Term wins against Long Term investments. A more accurate Cost-Of-Delay is just the numerator of the WSJF calculation; the divisor part of the calculation hasn’t changed and as we’ve seen in earlier experiments it’s the job size that is suppressing the Long Term investments.

In the next posting we’ll look at whether there is a way of supplementing the standard WSJF to include Risk Factors to see if Risk can be used to suppress the tendency of the small items to dominate.